Trott Bailey University2012-01-26T06:19:00-05:00
Leadership is viewed differently by different people. Personally I think one of the greatest leaders of all time is Moses, leading the children of Israel on from Egypt to the promise land, a very famous journey called the Exodus. Like Moses, all great leaders are born from weaknesses, rise after failures and have an audacious dream. In 2011 I was granted the prestigious opportunity of building my leadership skills by leading a group of dedicated engineers to participate in an Engineering Conference called IEEE SoutheastCon in Tennessee USA.
A major focus for the conference is the student competitions which induced a total environment shift when students are given the opportunity in 6 different competitions to showcase the latest technology from their university. 70 percent of the attendees were students totaling 434, representing over 40 universities in the region, eager to learn from engineering seminars and showcase their Universities latest technology in these competitions. The competitions included Hardware (Robotics), Software, Technical Papers, Ethics Papers, Branch Web Site, T-Shirt Competition.  UTech’s Student Branch of the IEEE has been attending and participating in the different competitions since 1991.
UTech is the only non-American institution at the conference and competitions.  For the typical team, attending the conference might be a long bus drive or a cool road trip. So what could be a couple hundred US Dollars for an American University turned out into a few thousand US Dollars to fund 12 students airfare, hotel, robotics parts, meals, conference registration and other cost attached to attending the event for the Jamaican base institution. Raising this type of capital in the space of a few months meant: constant fundraising events, individual contributions from team members  and meeting with companies for sponsorships and grants. All these activities concurred while competition preparation was taking place. Such as: The first UTech robot since 2001 was being constructed, The Student Branch Website was being developed, the software team was programming, the ethics team analyzed case studies etc and coordinating all these activities meant mastering the art of task distribution and motivating all parties involved. A task I enjoyed since the team was naturally talented in the different areas and had a genuine passion for the different areas.
On Thursday March 17, 2011 twelve students and our adviser, Dr. Dave Muir, left Jamaica to represent the university, the country and the Caribbean region at IEEE SoutheastCon 2011. The team arrived in Nashville 12:00am Friday morning. After a mere 4 hour rest we went straight to the robotics competition practice room.  We were greeted by a number of other institution excited to know that our team made it, over 2000km from home and were eager to see our robotics project.  The UTech team comprised of Jamaal Wilson, U-shane Taylor, Johniel White, Durvan McKenzie, Brent Richardson, Latania Morrison, Odane Kentish, Evon Williams, Dean Jones, Tennison Dougherty, Osane Lannaman and myself: Kimroy Bailey.
Robotics Competition
Of the 6 Competition the robotics Competition was by far the most fascinating and the major seller for the conference bringing out the largest audience and teams. The competition focused on designing an autonomous robot to be deployed in response to natural disasters.  The robot’s action was triggered only by a start button, thereafter there was absolutely no wireless communication or control of the robotic device. The robot comprised of sensors to make it intelligent enough to overcome obstacles, search for victims and report their status (live, unconscious or dead) and their exact location  both audibly along with a visual display. This competition however, despite having a robot with all the listed capabilities induced a totally different test for the UTech Team. When the team was being checked at the airport the robot was scanned using XRAY technology which damaged the microprocessor on the frequency detection circuit, a very integral component required to detect where unseen hazards are located when rescuing a victim in the competition. This posed two questions to the UTech Team: Give up and be well entertained by other Universities and their robotics Project or find a way to re-engineering 5 months of research and construction in less than 18 hours.  As frustration surmount in the group, its  natural to expect the team leader to keep it all together but even leaders need words of motivation and my team did not lack the support structure to remind me that we will be fighting this through!…
After a 18 long hours of innovation, re-construction the team accomplished what was considered an insurmountable task in order to have a robot even capable of participating in the competition.   Other teams watched in awe as we used the limited resources we had access to, to innovate a robot in 18hrs and navigating around our faulty micro-controller that left Jamaica in a perfect condition. The robotics team made it to the second round of the competition and was among the top 25 of over 40 universities. Despite the position, no placement can quantify the team spirit exhibited, the fight fought, and engineering it took to even reach the point of being able to participate in the competition.
Excelling against All odds 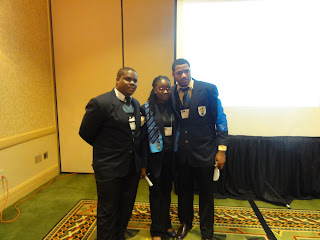 Despite not being able to source the desired external funding from private organizations for travel, robotic parts and other expenses for this venture, UTech Jamaica was well recognized and represented in all 6 competitions against all odds.
• UTech was third place in the Technical Paper Competition, where I Presented a technical paper on: “The Benefits of Utilizing Offshore Wind as Jamaica’s Primary Source of Renewable Wind Energy Compared to its Onshore Counterpart.” The Technical paper passed the written test and was selected among the top 8 of all the universities to be presented at the conference.
• UTech was the only university which had a recipient for the “IEEE Regional Exemplary Student Branch Award”. I was nominated for the award by the Jamaica Section for outstanding leadership and contribution to the development of the university’s student branch, the nomination was reviewed by IEEE USA and of all 50+ universities in the southeastern region of the United States I was granted the Student Activites Award.
• The university was also in the top five for the Ethics Paper Competition.
• The hardware team left an indefinable mark on the minds of attendees and competitors at the hardware competition after exhibiting true engineering and displaying utmost resilience to redesign our robot . We were placed 23 out of 42 for the competition and left with an experience second to none.
• On the lighter side the team was also mentioned for being the “best dressed university” of the evening and would have gotten an award for the latter such an award existed. Our attire was of such a great impact that the conference organizers have decided to consider includeing a best dress award for the annual event.
The team returned home on Monday March 21 at approximately 11:30 pm extremely proud of themselves with plans to make SoutheastCon 2012 an even better one!