Trott Bailey University2012-03-20T04:28:00-05:00
The largest IEEE Region 3 professional engineering conference culminated on the 17th of March with a grand banquet and award ceremony at the Wyndam Orlando Resort. The 3 days conference revolved around the Student Competition which involved 52 universities in the Southeastern United States and Jamaica.  For details about the competition please see my previous post.A picture is worth a thousand words… I will save you the trouble and update you with some photos and a brief description under each.The 2012 Robotics Competition was the largest competition since its inception. 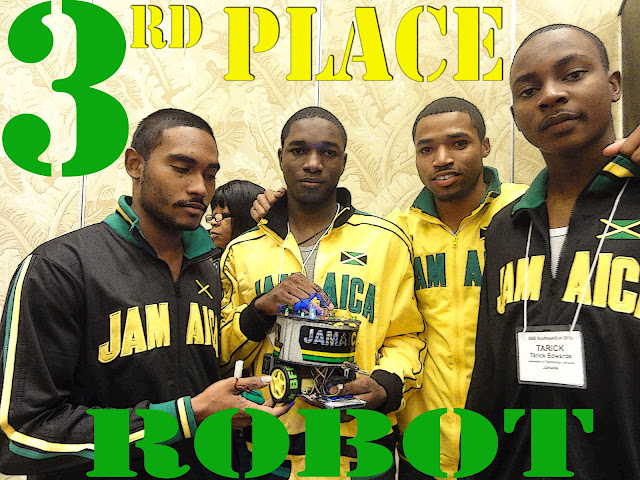 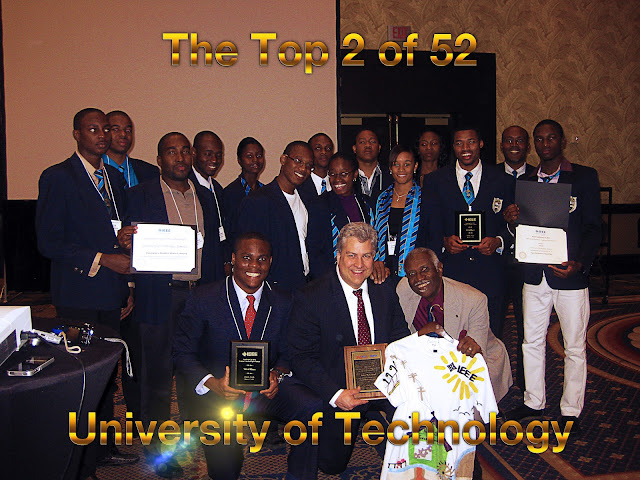 ____________________________
The robot practice area opened on Friday March 16 at 8:00am. Teams queued at the door eager to commence test runs on the robot’s course designed and by IEEE Student members at the University of Central Florida. The clocked ticked and teams worked like there was no tomorrow, 24 hours couldn’t feel longer…

A few hours into the day I met the U.W.I Engineering team representing in their colors and catching up on some food after sleepless nights preparing for the conference. The small but talented team participated in over five competitions, how did they distribute all that work among six students only God knows but as Jamaicans nothing limits our potential. Considering the fact that this was the first time they actively participated in the conference they left a bold footprint stating to the other 50+ institutions that Engineering in Jamaica is very alive.

Saturday morning arrived, and 5 months of hard work, dedication and sacrifice was getting ready to be put to the test. Adrenalin started pumping, nerves started pulsating and earnest prayers were been prayed. The ethics paper team was one of the first to be featured when the gathered at 9:00 for their 2 hour case analysis 12 minutes presentation and 3 minutes question and answer. 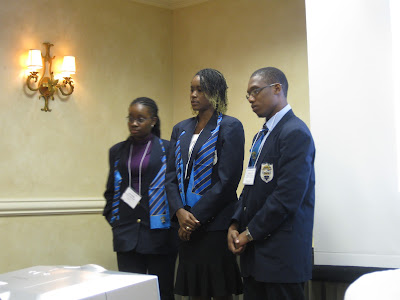 Across the ballroom Brent Richardson entertained his audience with his 15 minutes technical paper presentation as he expressed his thoughts on how he can and will improve the efficiency of Jamaica’s sugar industry one of the heartbeat product of the nation.

In the midst of it all, our T-Shirt was being prepared for the lime light as hundreds of students flood the stand to view our design of a totally renewable Jamaica depicting hydro, solar, geothermal, and wind energy designed by Mark Newman. The T-shirt was very unique in a number of ways; besides the design, the shirt was made of a number of different materials, colors and textures to depict the different energy sources. To top it off Mark included a circuit of L.E.D.s modeling streetlights that was powered by the energy sources. At the back of the shirt was a switch installed by Shayne Addison, Radchiv Guy and Tarick Edwards which controlled the ‘street lights’.

The most drilling of all the rooms was by far the room with Diandra, Otis and Basil at the heart of the convention center. The SAPNA trio took on the software competition challenge. Four hours of logic procedures, algorithms and coding without internet, e-book nor food; secluded in the programing world. Seconds faded into minutes, minutes into hours and hours into the Robotics competition. Heart beats were abnormal, tensions were high and anxiety increased as the 52 Robots across the regions took center stage and SoutheastCon came alive. The UTech Robotics team entered the OPEN competition which was facilitated a dynamic range of competitions from the hobbyist, to the masters student who no longer fits in the undergrad class of engineers back to the expert in the industry who wants to intrigue their experience minds with the challenge. 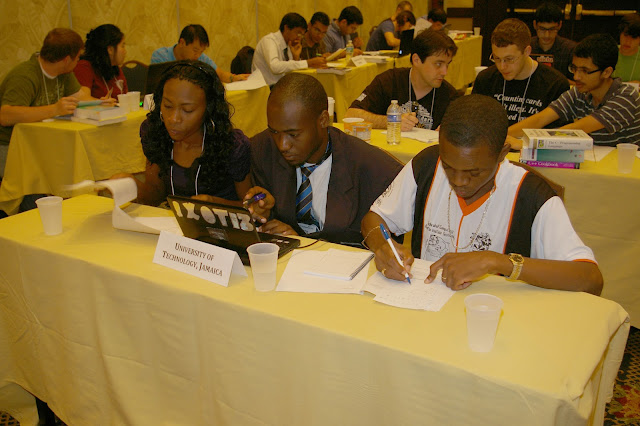 Saturday passed and so too did the competitions; 7:00pm on the night we all waited for was the award ceremony and banquet. The atmosphere was transformed into a professional environment where students were given the opportunity to meet future employers or college professors willing to entertain their application for Post-Grad and the premiere opportunity to build a network of networks.

The University of Technology, Jamaica received four awards in total including the prestigious Exemplary Student Branch Award for outstanding student branches operation over the year. The only other institution that shared that Award was The University of Florida (UFL);  UFL is also the only other institutions that got more awards in total than UTech with a total of six awards compared with UTech’s four of the 52 competing institutions at the conference.
3rd Place: Open Hardware Competition – Team Leader Kimroy Bailey, Chevaughn Robinson,Tarick Edwards and Radchiv Guy. The UTech Robotics group has over 15 members, four of which traveled to Florida to represent the team. The Robot was entered in the Open Competition which had far less competitors than the Undergraduate competition. This is a stepping stone for the student branch to prepare the group to have two teams for both the open and undergraduate competitions for next year’s conference in Jacksonville, Florida.Here are a few of some of the most memorable moments at the conference.

Special thanks to the conference organizers from the University of Central Florida, lead by the Student Branch Chair Michael Scherer who did an immaculate  job along with his team in making this conference a notch above all others. The technical conference chair Dr. Donghui Wu and his team, Dr. Hannemann our student representative, Mr. Percy Shadwell for his guidance, support and advice, Mr. Roberts and Mr. Tulloch-Reid from the Jamaica section, Dr. Daniel Coore from UWI who gave us the ingenious idea to aid our robot’s navigation circuit, Dr, Dave Muir and Mr. Dwight Reid who traveled with the team and supported us for every second of the conference and everyone who had our best interest at heart and kept praying for the best outcome for our institution.

If there is ever a time UWI and UTech need to have an integrated approach in our nation’s building, that time is now. Personally, I think we should leave competition at the doors of the stadium, at the edge of the football field or around that final stretch of the track. Robotics, Engineering and Education in general is a great avenue of team integration, cohesive collaborations as we work together to build Jamaica Land we Love!